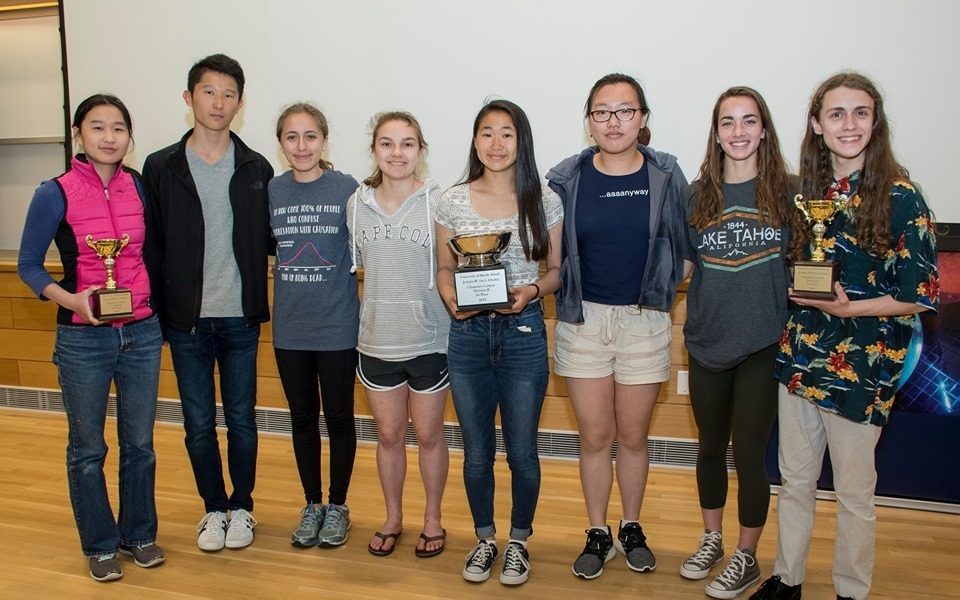 About 300 students from eight high schools competed in the 86th annual contest, held May 21 on the Kingston Campus. Individuals and teams entered one of two divisions depending on the number of years of high school chemistry instruction they have had.

The Hendricken team of Jack Aylsworth, Dylan Brunner, Cory Goldstein, Walter Kretzer, Sean Miranda, Christopher Relyea, Robert Schattle, and Noah Sullivan finished first in Division I, for students who have had no more than one year of chemistry that is not Advanced Placement. The Warwick high school has taken first place in Division I each year since 2012.

For the third year in a row, Barrington captured the team title in Division II, for students who’ve had more than one year of chemistry or an AP class. The Barrington team was comprised of Shiyuan Huang, Jessica Liang, Julia Howarth, Jack Cheng, Anika Breker, Willis Bilderback, Amy Zhao, and Kelly Gorman.

In the Division I individual competition, Hendricken took the top two spots, with Kretzer finishing first and Relyea second. Jackson Kustell of Barrington was third.

“We attend the competition to enable our students to apply the chemistry knowledge that they have learned throughout the year and to experience a college setting,” said Amy Nicodemus, an honors and conceptual chemistry teacher at Barrington High School. “We work hard to have a chemistry team of three teachers that work collaboratively to make an excellent program and thoroughly prepare our students to pursue AP chemistry or chemistry in college.”

Students had one hour to answer 45 multiple-choice chemistry questions, which were graded by URI graduate and undergraduate students, and staff. After the exam, students toured the Kingston Campus and the Beaupre Center for Chemical and Forensic Sciences, the site of the competition. Graduate student Ben Cromwell also performed a series of chemistry demonstrations for students.

“Many people in the Chemistry Department worked really hard to make this year’s contest a success,” said Ben Ruekberg, manager of the Chemical Undergrad Laboratory, who has overseen the chemistry contest for the last 30 years. “Also, we received a great deal of help from Erin Earle, associate director of the Campus Visit Experience and Welcome Center. She and her people contributed significantly to the students’ enjoyment of the competition.

“I also appreciate all the hard work the high school teachers put in so their students could participate in the competition.”